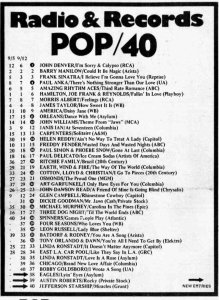 Today is One-Hit Wonder Day. We take as our text for today’s meditation the Radio and Records Pop 40 from the week of September 19, 1975. It’s an adult-contemporary chart from the now-defunct industry magazine, and I’m going to cross-reference it with the Billboard Hot 100 chart because that’s our true Bible around here.

(To see a bigger image of the chart, which I swiped from the excellent Radio Rewinder Twitter feed, click it.)

Some artists on this list are sometimes considered to be one-hit wonders, but are not. Morris Albert, for example, conquered the world with “Feelings,” but reached #93 on the Hot 100 with “Sweet Loving Man” in February 1976. Batdorf and Rodney also made the Hot 100 twice: “You Are a Song” got to #87, and “Somewhere in the Night” rose to #69 in a three-week run in December 1975. And although “Third Rate Romance” is the only Amazing Rhythm Aces tune to hit the Billboard Top 40, they hit the Hot 100 two other times, with “Amazing Grace (Used to Be Her Favorite Song)” and “The End Is Not in Sight,” both in 1976.

One act on this chart is technically a no-hit wonder as far as the Hot 100 is concerned. Paul Delicato hit Billboard‘s adult-contemporary chart five times in 1975 and 1976 without ever making the Hot 100—one of only four artists from the 60s to the early 90s to have that many AC hits without breaking the big chart. The full title of his hit on the 9/19/75 Pop 40 is “Ice Cream Sodas and Lollipops and a Red-Hot Spinning Top.” Delicato started as a session guitarist and bass player in his native St. Louis, which brought him to the attention of Chuck Berry, Ike and Tina Turner, Albert King, Little Milton, and others. In later years, he performed and produced musical revues in Las Vegas, Branson, and other resort towns.

Cotton, Lloyd, and Christian’s “I Go to Pieces,” made famous by Del Shannon and Peter and Gordon, was their only Hot 100 hit, eventually reaching #66. (A second record, “I Can Sing, I Can Dance,” made Billboard‘s AC chart but not the Hot 100.) Michael Lloyd produced hits for the Osmonds, Shaun Cassidy, Leif Garrett, Belinda Carlisle, and Barry Manilow, among others. He was also music supervisor on the movie Dirty Dancing. Chris Christian had a couple of minor hits as a solo act; the one you might remember is “I Want You, I Need You” from 1981. Darryl Cotton had been a successful musician in Australia going back to the 60s, and would continue to be in the 80s and beyond, also becoming a prominent actor in Oz.

Englishman John Dawson Read made two albums in the mid 70s, A Friend of Mine Is Going Blind and Read On. After that, he raised a family and went into private, non-musical business, but still continued to write and perform a bit. In 2005, he returned to the studio for an album titled Now, Where Were We? “A Friend of Mine Is Going Blind,” inspired by and dedicated to a friend of Read’s who suffered from muscular dystrophy, made #72 on the Hot 100.

Certain groups are so obscure that the Internet knows practically nothing about them. Like East L.A. Car Pool, whose “Like They Say in L.A.” made #72 on the Hot 100. Joel Whitburn says they were led by conga player Jack J. Gold, who also produced their lone hit. Gold had a brief career as a studio musician in the early 70s before becoming an attorney (which he seems to have been doing while playing with East L.A. Car Pool). He was also technical consultant on a couple of movies, and eventually a juvenile court commissioner in Los Angeles County. The legal system played a role in the career of East L.A. Car Pool, as it turned out. They were on the GRC label, which was part of the recording empire of Michael Thevis, who made a lot of money producing porn films in the 70s and laundered it through his record labels, until a business partner informed on him and the whole edifice crashed down. Read more about that here.

There’s one other record on this list that may have caught your eye like it caught mine: “I Believe I’m Gonna Love You” by Frank Sinatra, sitting way up at #3. Although Sinatra would hit the Hot 100 only one more time after “I Believe I’m Gonna Love You” made #47, he hit the Billboard AC chart eight more times, as late as 1984. Pretty much the opposite of a one-hit wonder.

All text copyright 2004-2021 by James A. Bartlett—not that this little notice is going to stop anybody from stealing stuff if they want to.