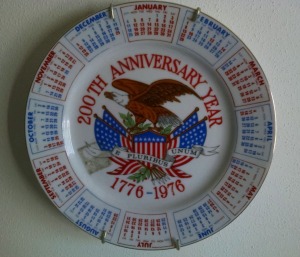 Forty years ago today, July 5, 1976, was a Monday, the legal holiday celebrating Independence Day and America’s Bicentennial. But on July 5, the Bicentennial was a balloon with a slow leak. Although CBS continued to broadcast its primetime Bicentennial Minutes through the end of the year, the observance, which had begun two years before, started to seem threadbare and seedy. Within weeks, Bicentennial merchandise (such as the commemorative plate pictured here, which hangs on the wall in my office) was on clearance.

It’s easy to imagine an alternate Bicentennial celebration that began on July 4, 1976. Some of the most storied and significant events of the American Revolution were still in the future on July 4, 1776, including Washington’s crossing of the Delaware and his defeat of the British at Trenton, the American victory at Saratoga, the winter at Valley Forge, and the alliance with France. It was those events that sealed the destiny of the new nation, far more than the signing of the Declaration of Independence at Philadelphia. We might easily have commemorated them as their bicentennials occurred over the next two years.

We didn’t do that, of course. A government commission began planning Bicentennial celebrations in 1973 and quickly gave the event an official logo. The Bicentennial Minutes began on July 4, 1974; the U.S. Mint issued Bicentennial quarters, half-dollars, and dollar coins beginning in the summer of 1975, and some states issued Bicentennial license plates. Marketing and merchandising hype, which is the primary way Americans celebrate every holiday, was at full boil in 1975, resulting in an astonishing variety of Bicentennial-themed products, and criticism of the commercialism of the event.

But the Bicentennial wasn’t all cheesy, despite the way we remember it. The celebration prompted many communities around the country to spruce up, especially their sites with historic value. There was a boom in local history, a subject sadly neglected (then and now) by social studies classes, as people thirsted to learn how their community fit into the larger national drama. Some communities buried time capsules as a way to speak to the future about what mattered to 1976, just as they imagined the patriots of 1776 might speak to them 200 years later.

Cynicism isn’t a 21st century phenomenon, and lots of 1976 Americans believed the whole thing was a bad hype. In their defense, it could be hard to see past the horrid state of the nation in that summer—racked by recession, lacking confidence in elected officials, and in an uncomfortable transition to an unknown future. (Never mind the Bicentennial beer cans and toilet paper.) But the vast majority of Americans took the Bicentennial for what it appeared to be: the opportunity to be proud of what their country had accomplished in 200 years. And what it had accomplished was pretty remarkable: it had become the world’s economic engine, first at the turn of the 20th century and later after World War II; it had exported its form of democracy (successfully or not) around the world; it had mobilized its military against despotism and won; it had become the world’s cultural hub. All of which would have seemed pretty unlikely on July 4, 1776.

But by July 4, 1976, we’d been living with the Bicentennial for nearly two years. When the day was past, we were ready to put the celebration out at the curb like a dried-out Christmas tree. Like the Bicentennial itself, that, too, is distinctly American. Although we claim to venerate our history, we are descended from people who were perpetually making new starts (Davy Crockett: “You may all go to hell, and I will go to Texas”) and reinventing themselves—a trait that persists in the way our political classes insist on rewriting history to serve their present purposes, and the way we mis-remember and distort the events of our own lives. We are much better at moving forward and imagining new futures than we are at looking back and learning from where we have been.

So it’s no wonder we tossed the Bicentennial away quickly. It’s what we always did, and what we continue to do today, 40 years later.

(If you’re interested in how the world looked on the day after the Bicentennial, the ABC Evening News from July 5, 1976, is at YouTube. Part 1 is here.)

All text copyright 2004-2023 by James A. Bartlett—not that this little notice is going to stop anybody from stealing stuff if they want to.